PHOTO: Water is trucked in daily to maintain the area’s gravel roads. (Supplied)

Up to 100,000 litres of water is being used each weekday by a regional New South Wales council to keep drivers safe on its gravel roads — all 954 kilometres of them.

The work will total around $2.4 million this financial year, or around $10,000 each weekday.

But at a time when water is scarce, it’s not the cost that has some residents questioning the priorities of Upper Hunter Shire Council.

Between 40,000 and 100,000 litres from Glenbawn Dam are being used each weekday to help with road compaction, while about 900 people in the shire’s north are on level 6 water restrictions.

Murrurundi residents are limited to just 140 litres of personal water use per day, totalling about 126,000 litres per day.

The town’s dam has run dry, and since January water has been trucked in daily from Glenbawn Dam, which sits at around 48 per cent.

If the average water usage for road maintenance is 70,000 litres per day, that’s equivalent to 500 people’s daily water usage in Murrurundi.

PHOTO: The Mayor says sealing the roads is an option, but an expensive one. (ABC Upper Hunter: Amelia Bernasconi)

Level 6 restrictions came into effect in July 2018. It means no outside watering is permitted, showers are capped at three minutes, and households can only do two full loads of washing a week.

“With evaporation, we’re carting in around 250,000 litres a day just to keep people having showers and drinking and whatnot,” Mr Cross said.

“I just don’t think the roads are bad enough to even worry about at the moment. We just need to worry about making sure everyone can do the washing and have a shower.

“We’ve only got one child, so it’s a bit easier for us … but for a family with three or four children, I’m just not sure how on Earth they could possibly limit themselves to three loads of washing a week.”

Struggling to keep up

The council said workers tried to use water from nearby rivers and creeks on the roads where they could, but it was becoming increasingly difficult with the drought.

Recycled water is not an option either — it’s being used on local golf courses, racecourses and sporting fields — leaving only the trucking of water from Glenbawn Dam.

“Obviously we’re trying to be waterwise and use the water the most efficient way we can to try to minimise the amount that we take,” director of infrastructure services Nick Havyatt said.

“With the drier weather, [the unsealed roads] are falling apart quicker … it’s taking longer to get them repaired and costing more.”

Mayor Wayne Bedggood said the council was lagging behind in its maintenance works.

“[We’re] carting in between 40,000 to 100,000 litres of water to do that road maintenance, and that may or may not get somewhere between a kilometre to three kilometres of road graded,” he said.

“We are struggling with keeping up, especially with our unsealed gravel roads. I know it’s frustrating … I know the roads are in awful condition.”

Locals want to seal the deal

Lisa Randle has lived for more than 30 years at her property on Yarrandi Road, just outside of Scone, where she’s never had a mail delivery run, garbage pickup or local school bus come to her home.

“There’s probably other things we don’t get either, but I mean you pay your rates and then you go and pay for a post box subscription, the fuel to get kids to school,” she said.

“We have to take all our rubbish into the tip, so you’re either looking at having to hire yourself a skip bin or pay someone to come and cart it away.”

Ms Randle said if her rates weren’t going to those services, she wanted them to fund sealing some of the shire’s busier gravel roads.

“The southern end of Yarrandi Road has three S bends which also attract the local hoons, and as soon as [council] grades it, they come out and cut it up because they use it as a racetrack,” she said.

PHOTO: Locals say as soon as the council grades Yarrandi Road, hoons come out and cut it up. (ABC Upper Hunter: Amelia Bernasconi)

“If they seal the roads, you would have less issues with dust, which, at the moment with these winds, is out of control because of the drought we’re in as well, but ratepayers just don’t get value for their rates as far as all the things they miss out on.

“It’s almost adding insult to injury to say, ‘Well, you’ve got to just take driving on a corrugated road and put up with it’.”

The road’s condition was also doing damage to vehicles, with tyres wearing quicker and loose gravel flying up at cars and trucks, Ms Randle said.

“For people who are struggling with drought and feeding animals, buying water, things like that, it’s just a kick in the guts to have to have huge maintenance bills on vehicles.

“I think council could prioritise and do some work on local roads just to give some people a bit of a break.”

So, why not just pave the roads?

“It is a very, very expensive option,” said Cr Bedggood, who added that council had flagged the problem with Roads Minister Paul Toole.

“He’s very sympathetic to it and he’s doing all he can to try to free up funds and have a look at how we might address this.

“The only real solution is more funding.

“The trouble is that the longer this weather goes on, and the further behind we get, the harder it is to catch up.

“There’s a massive deficit, and even with all of our crews out there working, and we’re even outsourcing and getting contractors in, we’re still not keeping up at this stage.” An area of the Molege Road link to the Owo Township Road was selected to perform a demonstration with the Engineered Base Stabilizer (EBS) to show the advantages over the asphalt method. 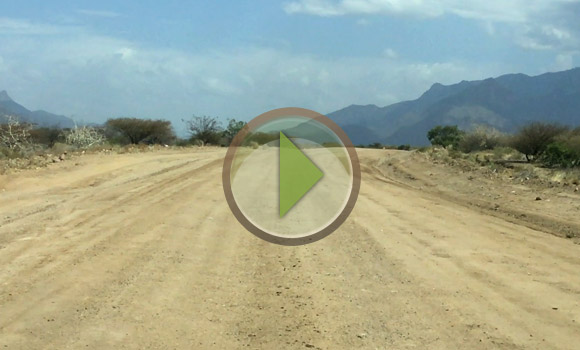 What if you could make a difference – save lives, provide safer roads, a safer environment for communities. Would you do it? This project entailed the upgrade and Surface Sealing of existing pathways, the parade area, entrance and parking areas of the Memorial Park in order to create an access throughout the park that would blend in with the surrounding landscape creating a harmonious, aesthetic and visually appealing atmosphere and at the same time prevent erosion and blowing of sand.